With the rate of extreme weather increasing the likeliness of wildfires this year, we have also seen an increase in the number and intensity of hurricanes, not only in the USA but also in Ireland. This year alone we have seen three major hurricanes, one in category 5 and two in category 3, all taking place within just three short months.

How are Hurricanes Formed?

Hurricanes form as a result of the sun heating up the ocean; the warm air created rises above particular hot spots of the ocean, forming a thunderstorm. Surface and upper-level winds merge together and, with the assistance of the Coriolis Effect, create the start of a tropical storm if winds exceed 39 mph. A hurricane will form fully if winds reach 74 mph and will fall into one of five categories depending on its wind speed, damage at landfall and storm surge. 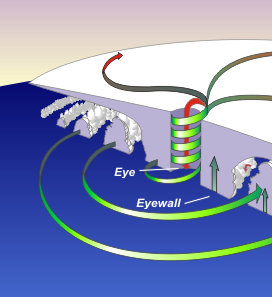 The Coriolis Effect is what causes the storm’s rotating movement, causing air and water to curve as they travel across the Earth’s Surface. Countries nearer to the equator will experience movement a lot quicker than those in the North or South, which means hurricane speeds may become more severe. The high-pressure air within the hurricane rushes to the storm’s low-pressure area in the middle, which causes winds to rotate as a result of being deflected.[1]

Inside the hurricane lies an ‘eyewall’, this is where bands of rain meet and the most severe winds and weather occur; as a result, it is considered the most violent section. However, not every section of a hurricane is so violent, in fact, the ‘eye’ or ‘cyclone’ is the calmest area of a hurricane as this is the region that is full of dry air and calm weather.

Most hurricanes take place over the sea, however, some do reach land and can have catastrophic effects.

How Are Categories Determined?

Hurricanes are categorised based on their intensity, but how are they determined?

Categories are in place to allow researchers to identify the severity of each hurricane, the determining factors include wind speed, damage at landfall and storm surge.

During the hurricane season this year (June-November), we have seen three severe hurricanes sweep the Earth; Harvey, Irma and Ophelia.

Hurricane Harvey was the first to break out this summer, forming on 17th August and lasting just over three weeks. The storm affected the US but took a liking to more tropical areas such as the Windward Islands, Cayman Islands, Texas and Louisiana. Hurricane Harvey was determined a category 3 hurricane as winds reached as high as 130 mph. Over 90 fatalities, both direct and indirect, occurred and almost $200bn of damages were caused.[2]

Hurricane Irma was the strongest hurricane the Caribbean and a number of US states faced this year, with winds reaching over 180 mph, making it a category 5 hurricane. The storm formed on 30th August, starting in Cape Verde and travelling through the Caribbean until reaching the US State of Florida. Hurricane Irma resulted in over 100 fatalities, both direct and indirect, and more than $60bn worth of damage, leaving many people without homes.[3]

Hurricane Ophelia was the last to take place this hurricane season as it formed on 9th October in Ireland. Winds reached a high of 115 mph, making it a category 3 hurricane. Hurricane Ophelia resulted in over 50 fatalities, mostly indirect, and over $1bn worth of damage. As a result of this, hurricane Ophelia has been declared as the worst storm to hit Ireland in the last 60 years.[4]