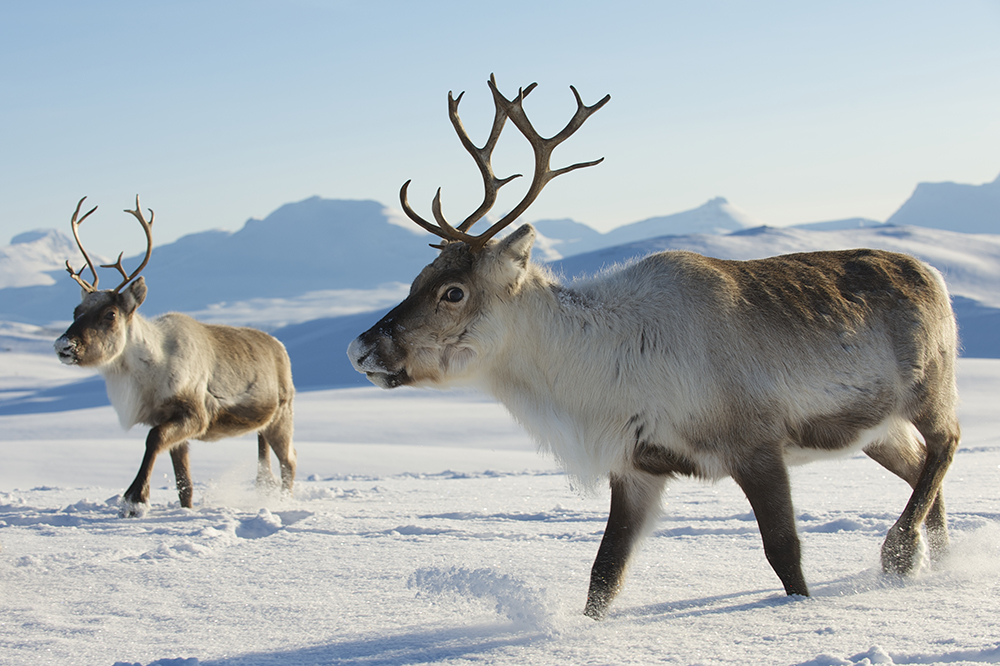 The effect climate change and global warming has on wildlife is a hugely debated subject. Typically, when we discuss how global warming impacts animals that reside in colder climates, the Arctic and its polar bears are the go-to topic of conversation. However, researchers in Norway have been discussing the not-so-clear effect that rising temperatures have on the reindeer.

Initial theories lead many to believe that warmer summers have resulted in increased amounts of the lichens, grasses and shrubs that allow reindeer to thrive. However, research indicates that the positive effects of these warmer summers are outweighed by the consequences of warmer and wetter winters.

Researchers from the Norwegian Polar Institute (NPI) have been studying the reindeer around an Arctic research centre in Ny Ålesund, a former mining town in south-western Svalbard, Norway, for nearly forty years. Since the beginning of the century, they’ve been looking specifically at how a phenomenon known as “rain-on-snow” affects the local deer.

The “rain-on-snow” phenomenon occurs when it rains during warmer spells in the long Arctic winter. When the temperature returns to its normal winter condition, sometimes as low as -30℃, the rainwater that has filtered through the cold winter snow freezes. This creates a thick layer of ice that encases the tundra below.

Reindeer rely on access to this tundra to survive the winter. They forage below the snow using their hooves to clear a path to their food. Unfortunately, the ice below the surface of the snow can be more than a few centimetres thick – too thick for the reindeer to break through.

Studies have revealed that in areas where the average thickness of the ice caused by rain-on-snow is greater, fewer animals survive the winter and fewer calves are born in the spring. In severe incidents, the reindeer population of Svalbard has been known to fall by almost 70%.

It’s not just death that leads to a reduced population of animals. Weight loss also has a drastic effect on the wellbeing of animals which can ultimately lead to fewer offspring. Another research team from Aberdeen, Scotland have been weighing reindeer regularly. Their research shows that in bad icing events, reindeer lose as much as 20% of their body weight. Even more worryingly, they have determined that this weight loss can lead to a long-term decline in the animal’s weight.

The average weight of a female reindeer in Svalbard today is around 12% lower than it was in the ‘90s, bringing many of them below 50kg. Research suggests that this is a threshold beyond which a deer’s reproduction success and the survival of their progeny sharply declines.

In-depth research has allowed investigators to track the situation and develop models of the ecosystem which will, eventually, lead them to discover the tipping points beyond which the rain-on-snow events will lead to irreversible effects on the Arctic food web.

For now, this research has allowed herders to prepare for these climate change conditions by taking their animals to less affected areas. In cases where this isn’t possible, they are forced to kill the deer humanely, before they suffer from severe weight loss and to minimise financial loss.

This is just another species that the, very real, threat of climate change endangers. In the last fifty years, the number of rainy winter days in the archipelago has more than doubled due to the effects of global warming. It is essential that we do what we can to reduce global emissions.