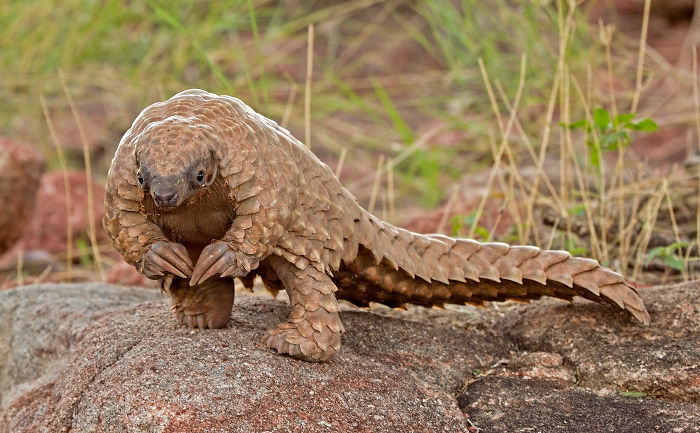 …my Lord, if I may….the prisoners, my Lord…they have escaped.

The physical appearance of a pangolin is marked by large hardened overlapping plate-like scales, which are soft on newborn pangolins, but harden as the animal matures. A pangolin’s scales are made of keratin, the same material from which human fingernails and tetrapod claws are made. The pangolin’s scaled body is comparable in appearance to a pine cone. They have short legs, with sharp claws which they use for burrowing into ant and termite mounds and for climbing and extraordinarily long tongues.

Though they look like reptiles, they are in fact mammals. Along with being solitary, they are also mostly nocturnal. When threatened they curl up into a ball where their sharp scales provide extra defence and they can use their sharp tail to attack predators.

Why are Pangolins so Popular Among Poachers?

Highly sought after in China and Vietnam, their meat is regarded as a delicacy and their scales are used in traditional medicine and folk remedies. They are believed to cure a range of ailments.

Can We Deliver Them Some Good News?

It’s hopeful that future generations can witness pangolins beyond just memes on the internet. In 2016 over 180 governments announced an agreement to end legal trade of the species and protect it from extinction. In June 2020 China increased protection for their native pangolin and banned the use of their scales in medicine.

Though countries are on the right path to protect these animals, Illegal trafficking is still a problem. Only time will tell if these animals will recover.