Both our Energy in 2018 and Energy in 2019 articles gave detail to the number of changes that were taking place in the energy management sector; 2020 is a year that will see such legislation come fully into force.

2020 will also be the year of consultations. Under the current consultation; Non-domestic Private Rented Sector minimum energy efficiency standards, the government proposes to raise commercial EPC requirements to B or C, and another consultation will call for Display Energy Certificates to be a mandatory requirement for the private sector.

As always, the rollout of residential smart meters continues with gas and electricity suppliers required to take all reasonable steps to roll out smart meters to all domestic customers.

Our previous articles introduction ended on the focus of how energy is taking a prominent role in our day to day lives. A lot has changed since then. With the influence of Greta Thunberg, Extinction Rebellion and disasters like the Australian wildfires, we are focusing more on the environment around us. So we will leave you with this thought:

For a full breakdown of what and when each legislation deadline is, please visit our timetable.

The Carbon Reduction Commitment (CRC) ended in October 2019. Climate Change Levy (CCL) rates were increased by an average of 51% from the 1st April 2019 to ensure the financial loss from CRC was recouped. The rates for 2020/2021 and 2021/2022 are outlined below. The rates for 2022 onwards have yet to be issued. To keep up to date with this, sign up to our mailing list here.

If your business is required to pay CCL and you are unsure of the cost, you can use our CCL Calculator to find out.

This report will include all UK energy use (as a minimum electricity, gas and transport), associated greenhouse gas emissions, the previous year’s figures for energy use (except in the first year) and GHG emissions, at least one intensity ratio, any energy efficiency actions taken and methodology used.

When should I report?

Participants whose financial reporting period is 1st January 2020 to 31st December 2020, should file with Companies House in 2021.

The Energy Saving Opportunity Scheme’s Phase 2 has now finished and participants should have submitted to the Environment Agency (EA). The EA made it clear that failure to comply by 5th December 2019 will result in a penalty of up to £45,000.

Further to this, it has been made clear that participants who failed to meet the deadline of 5th December 2019 are still encouraged to make a submission as soon as possible as this will be taken into account in the event of any enforcement action that may follow.

Phase 3 has begun. We advise all participants to work with their lead assessors ahead of the new compliance deadline; 5th December 2023. This will make reporting to the EA much easier.

An EPC is applied to a building when you either sell or rent the premises or to a building that was under construction and is now finished. An EPC provides an efficiency rating based on the characteristics of the building (the fabric) and its services such as heating, ventilation and lighting. This is known as an asset rating. Currently, buildings need to achieve a minimum rating of E to be sold, rented or built.

A consultation; Proposals for the minimum energy efficiency standard for non-domestic Private Rented Sector, was issued and closed on 6th December 2019. It sought views on how best to improve the energy performance of non-domestic private rented buildings through tighter minimum energy standards. The Government’s preferred trajectory is that all non-domestic privately rented buildings achieve a minimum energy efficiency standard of EPC Band B by 1 April 2030, provided the measure or package of measures are cost-effective. the outcomes of this consultation should be available next year.

A DEC shows the energy performance of a building based on actual energy consumption. It uses variables such as total GIA, benchmarks (what type of building it is), occupancy hours and actual energy consumption to provide a building with an operational rating that is benchmarked against similar buildings in England and Wales. Under current legislation, a DEC is applied to all public buildings and can be done by the private sector voluntarily.

There will be a consultation in 2020 outlining the proposal for making DECs mandatory for the private sector. To keep up to date with this, sign up to our mailing list here.

A CCA is a voluntary contractual agreement between an organisation and the Environment Agency (EA). The organisation, usually an industrial company, agrees to report energy use against a target to the EA. CCAs are a UK Government initiative having the objective of reducing industrial energy use and CO2 emissions. For those organisations involved at the time, the first reporting period was in 2002. In its current form, CCAs are to continue operating until 31st March 2023.

The CCL relief on gas and electricity from CCAs which follows the 12 month period commencing 01/04 has been published and the entitlement to claiming CCL relief from having a CCA runs until 31/03/2023.

There is a possibility of CCAs continuing into a 3rd phase.

At the time of our Energy in 2019 article, SMETs2 were coming into the market, meaning that you no longer needed to replace your smart meter when you changed supplier. This has opened up the opportunity for all energy suppliers to offer smart meters to their customers. However, the time frame for obtaining a smart meter for your home will vary as these are being rolled out on a regional basis by some suppliers.

Though the domestic smart industry is moving in the right direction, the full completion of the rollout has been pushed back further, with the aim of getting 85% of all UK homes to have a smart meter by 2024. Not to mention the programme’s costs have ballooned. Figures from 2017 put the costs of the UK’s smart meters programme at an eye-watering £14bn. The Commons Science & Technology committee was concerned at the time that the £6.2bn return will never happen.

From a consumer perspective. The issue with smart meters is that they produce 3 variations of users. The three different types of smart meter users are as follows: the first being active users, specifically the elderly, who feel they need to constantly monitor their meters; this produces paranoia that they may be using too much energy and can actually result in a higher cost if they do not fully understand smart meters and aren’t aware of what their target should be to save money. The others fall into two categories; those who understand how and what the meter means and take action to lower their bills through energy-saving measures and, finally, those who ignore their readings and go about their day as usual. This final group costs the government substantial capital as they have produced and installed smart meters that are not saving users any more money than households that use conventional energy consumption systems.

Time will tell if smart meters truly have the impact they are designed for. But for now, they will continue to play a key part in our ‘Energy in…’ articles.

The European Union has agreed to create a system to classify green investments for business with the first set of rules coming into effect December 2021.

This new green label sets out the highest standards available to investors. It covers renewable technology and clean energy products such as wind and solar. However, for the car industry, the draft list from a European Commission’s expert group states they will only be labelled sustainable based on the revenues they generate from vehicles with engines that have zero emissions.

As for nuclear and gas, the framework leaves open the possibility that these two and other low carbon technologies could be classified as technologies that help transition to a carbon-neutral world.

Who has to comply? Any EU listed company with more than 500 employees will have to disclose how much of its revenues and capital expenditure is based on activities that are environmentally friendly. 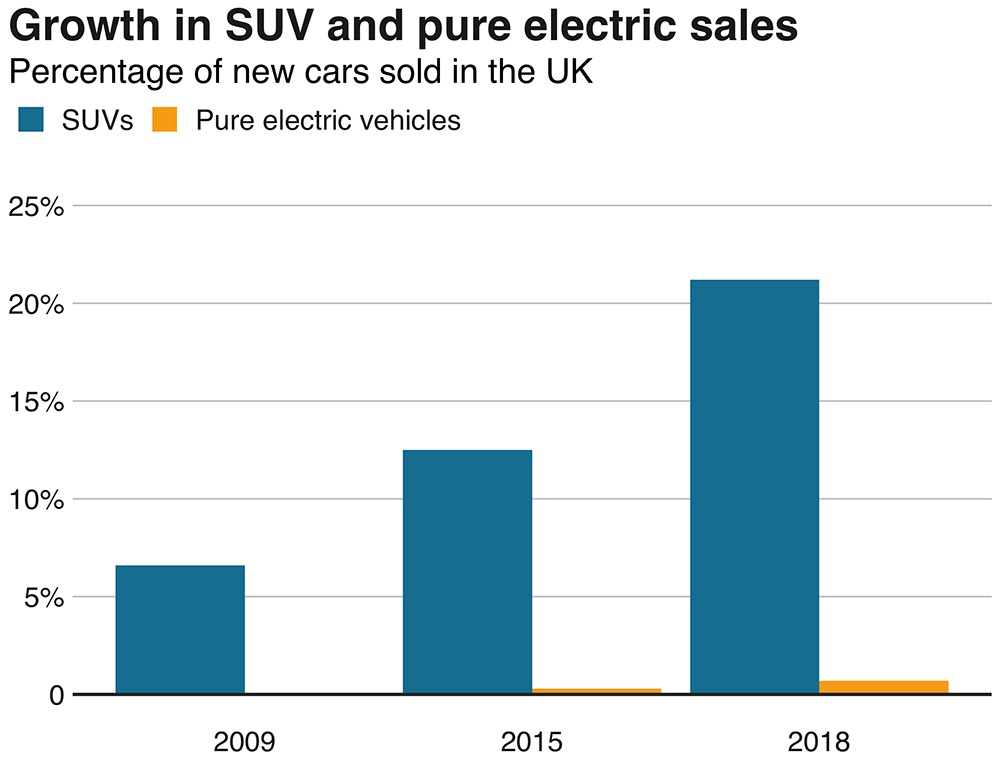 The government extended the ECAs for companies investing in electric vehicle charge points to the 31st March 2023. This will help achieve the government’s ambition for the UK to become a world leader in the market for ultra-low emission vehicles.

According to the BBC, over the past four years, there have been 1.8 million SUV sales, compared to a total of 47,000 for battery electric vehicles (BEV).

However, BEV sales are coming from a low base, as the technology is still relatively new.

Assuming the majority of these SUVs will be on UK roads for at least a decade, it is estimated the extra cumulative emissions total around 8.2 million tons of CO2.

We still see more electric cars on the road than last year, but the reason they are not achieving the numbers we’d like to see is down to five top factors:

The Ultra-Low Emission Zone (ULEZ) is now in place within London. Most vehicles, including cars and vans, need to meet new, tighter exhaust emission standards (ULEZ standards) or pay a daily charge to travel within the area of the ULEZ:

Currently, the ULEZ applies to the same area at the congestion charge. However, this will be extended to cover the area below from 26th October 2021. 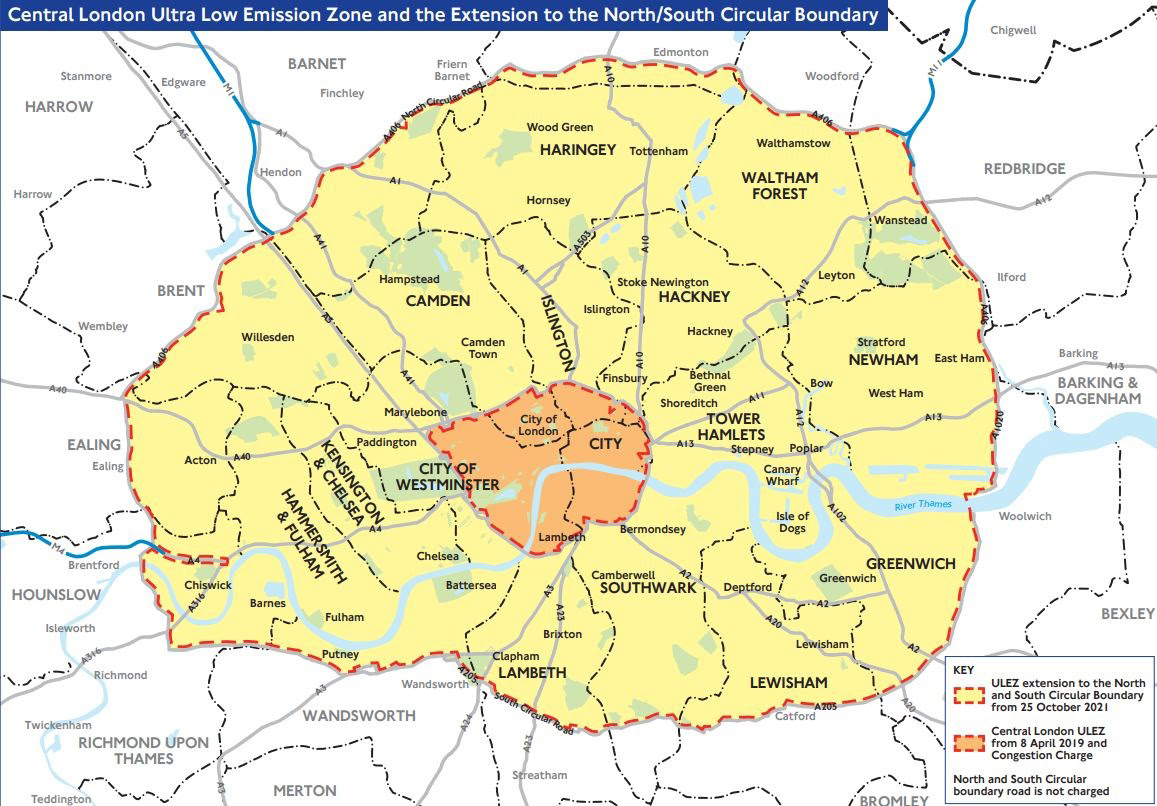 The city of London has set a goal of cutting toxic air pollution within the financial centre by 2030. From the end of March 2020, the UK’s first full-time ban on all petrol and diesel cars will come into force. Initially, this ban is set for Beech Street and a daily fine of £130 will be applied to all vehicles except some hybrids. The City of London intends to expand this to two further smaller zero-emission zones in the Barbican and around Leadenhall Street by 2022.

The Rumford Club is a dinner debate club based in central London. It was established in 1947 and at the time was for the discussion of air movement. The club has since grown and topics now include all parts of the built environment and engineering services.

Every dinner is held at the National Liberal Club and includes drinks, dinner and a different speaker for each event, with Lord Rupert Redesdale being its patron.

Membership is open to all within the industry that would find enjoyment and connection with like-minded individuals.

Though this is not a new piece of legislation or regulation, it is the leading club to meet leaders and influencers of these industries and is the one to watch in 2020.