Researchers within the Department of Food Science have established that exposing milk to light-emitting diode (LED) light sources for as little as four hours devalues its quality. It is believed that this exposure to LED light sources is more impacting than the microbial content that naturally forms in milk overtime.

Why Does LED Light Have This Impact?

The research team discovered that the nutritional content and milk sensory quality are vastly affected when exposed to artificial light sources and the sun. Many photosensitive components within milk such as riboflavin, part of the vitamin B group, are stimulated when hit by light energy, emitting a range of electrons that oxidize fats and weaken proteins.

LED lighting fabricates a wavelength pattern that is dissimilar to the fluorescent bulbs commonly used to brighten display cases. However, LED light sources usually produce a wider emission peak than fluorescent lighting and typically emits a wavelength of around 460 nanometers – within the blue spectrum. This wavelength is near that of which vitamins such as riboflavin absorb light and is what researchers expect to be the cause of the reduced quality and damaged nutrients within milk.

Stores are commonly installing LED lighting in order to boost light efficiency. While the installation of LED lighting may make the shelves look brighter and more attractive, they are damaging the quality and taste of the milk. 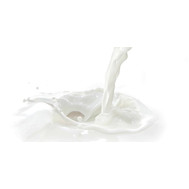 The popular milk packaging of today is allowing particular light exposure to occur, even within opaque plastic containers. These plastic containers are potentially jeopardizing the constitution of even the highest quality milk and affect its taste.

As a result, researchers have suggested that manufactures should turn their attention towards light-blocking packaging in the aim to minimize the damage from all light sources. This way, retailers can continue to use UV lighting to display their products in an energy efficient and attractive way, without affecting the quality of the milk.