Humanity is on target to recreate the Earth’s most significant climate change event ever. The amount of carbon released over several thousand years in the Paleocene–Eocene era, we, as a species, will manage to surpass in just a few hundred. This is dangerous.

Climate Change is scientifically proven. Many hear the words ‘man-made climate change’, which makes for a good sound bite but there is no such thing. Man negatively contributes to climate change and thus speeds up the process, resulting in rapid temperature rises, reduction of arable land, the extinction of plants and animals, the loss of whole ecosystems and much more.

To better understand this, we look at a crucial period of time known as Paleocene–Eocene Thermal Maximum (PETM) and compare it to what is happening in today’s world. Fifty-five million years ago, the Earth’s climate changed faster than at any other time within our geological record, reaching temperatures much higher than today. A short spike in history at only 20,000 years long, this event took place approximately ten million years after the asteroid hit the earth and wiped out the non-avian dinosaurs.

The Paleocene–Eocene Thermal Maximum was an extreme and sudden interval of global warming which occurred around 55 million years ago – between the Paleocene and Eocene epochs. The result of this warming was an increase in temperatures of around 5°C in just a few thousand years.

At the beginning of the Paleocene era, it was much warmer than it is today; the Arctic and Antarctic became sub-tropical, with crocodiles where there is now ice, and it was only near the end of the Eocene era that temperatures started to decrease and the ice formed. 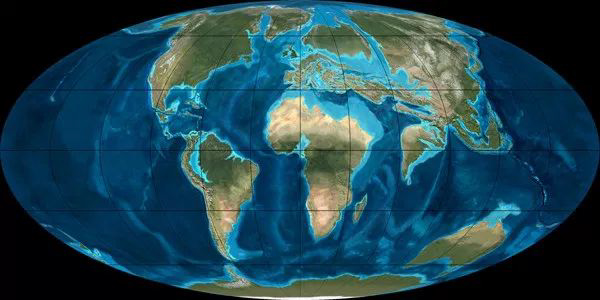 Evidence shows that within the PETM, temperatures rose dramatically for around 6,000 years and then cooling followed over 150,000 – 200,000 years. This resulted in different temperature rises at different latitudes across the globe, with northern latitudes increasing in temperature by 6-8°C and lower latitudes by 3-4°C.

The understanding of what caused such a rise in temperature around the world remains somewhat unclear. However, scientists point to the possibility of large releases of methane (hydrates) from the seafloor, or “burps” as scientists like to call them. Overall, this event released between 2,000 – 7,000 giga-tonnes (2,000 – 7,000 billion tonnes) of carbon into the atmosphere. To put this into perspective, as humans, we have released 120 billion tonnes in just the last 200 years.

Scientists can see this effect through the composition of sediments in rock and the shells of marine organisms. These fossils retain the evidence of the PETM, as seawater chemistry is partly controlled by temperature. The rock and fossil record is quite good, as it is geologically young, therefore, the rocks can be dated well at this time.

This global event had a catastrophic effect on life in this period and several species of planktonic organisms (Foraminifera) became extinct. On the other hand, many new animals appeared around this time, including deer, cows, camels, horses and primates, many of their modern counterparts are still around today.

The oceans have already absorbed nearly half of all the carbon dioxide emitted into the atmosphere by humans since the industrial revolution. This equates to about 120 billion metric tonnes of carbon.

With the Paris Agreement being ignored by some of the world’s biggest economies, the need to reduce emissions and the fact that we reached Earth Overshoot Day (the calculated date on which humanity’s resource consumption for the year exceeds the Earth’s capacity to regenerate those resources) earlier than anticipated last year, we need to do a lot more to avoid repeating the effects of the PETM.