Home > News > The Dark Side of Your Fish Dish 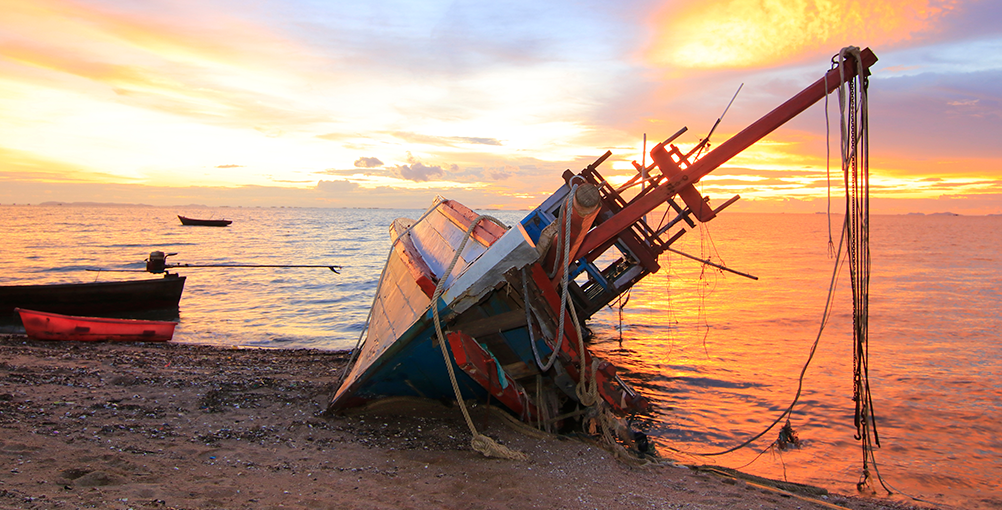 Did you know that the fish you ordered may not have been caught legally?

Over 500 North Korean fishing boats have been found washed up on the shores of Japan, often containing dead fisherman, over the last 5 years. These washed up vessels have been labelled “Ghost Boats”. The dead bodies aboard these ships were often decomposed beyond recognition, but it was expected that they died of starvation, hypothermia or dehydration. North Korean fishing vessels are relatively small. With a distance of 600 miles (965km) between North Korea and Japan, it raises the question of why these fishermen would risk travelling so far from their own shores.

A joint investigation, by The Outlaw Ocean Project and NBC News has revealed the world’s largest fleet of illegal fishing boats that has ever been discovered.

They have identified another type of ghost boat, one that is more dangerous and malicious than what the Japanese are used to finding on their shores, and they come from China.

Large industrial-sized Chinese shipping vessels have been seen off the South Korean coast moving in single file and decked with powerful electric bulbs to attract squid, elbowing out local fishermen and forcing them to travel further to catch the squid they need to survive. It is believed that these ghost ships have been operating secretly and have remained invisible for years.

The International Maritime Organization’s International Convention for the Safety of Life at Sea requires Automatic Identification Systems (AIS) to be fitted aboard international voyaging ships with 300 or more gross tonnage (GT), and all passenger ships regardless of size. This system provides real time information regarding each vessel with the aim of improving maritime safety.

However, these Chinese vessels were found to have their AIS turned off. When South Korean vessels tried to intervene in their questionable operation, they retaliated with flashing lights, blaring horns and veered towards the South Korean ship, as if to ram it.

To help in these matters, South Korea has worked with organisations including the Global Fishing Watch (GFW). The organsation published its findings in the Science Advance which identified what they called a ‘dark fleet’ of nearly 1,000 industrial-sized Chinese fishing boats hauling squillions of squid from the waters of North Korea’s exclusive economic zone each year[1].

Since 1983, Japan and South Korea have reported a nearly 80% fall in the stock of Pacific flying squid. With the demand for squid in Asia growing, and America importing around 80,000 tonnes a year mostly from China, this makes what’s left of these squid even more valuable and is likely to be what causes North Korean fishermen to venture into more treacherous waters.

Not the Only Case of Illegal Fishing

But it isn’t just China that has its fleets of dark ships. A Norwegian NGO has identified that around 200 Iranian fishing vessels are using what are called drift nets to catch fish. These nets hang freely in the water and scoop up everything in their wake. The goal of these Iranian vessels is to catch tuna.

These actions are what is known as IUU; illegal, unreported and unregulated. One study found that of 1,300 commercial species of fish and marine invertebrates, around 82% are being fished faster than they can repopulate.

After the findings from GFW and travelling across the world to Educador, the Ecuadorian Navy sighted around 260 Chinese fishing vessels looking for squid on the border of their exclusive economic zone, right next to the Galapagos Islands.

Squid is the ‘in fish’ as most of its predators such as tuna have already been so overly fished. These actions are known as ‘fishing down the food web’.

Though organisations and governments are starting to understand the impact and movements of these dark fleets, most illegal fishing takes place on licensed fleets. Vessels catching more than they have a permit for, misreporting on what fish they have caught, finning sharks and using illegal drift nets are all part of the problem.

Despite portraying itself as a victim of IUU fishing by Chinese trawlers, Ecuador’s fishing industry is reported to be just as bad. At the beginning of May, customs officials impounded the largest haul of shark fins in the territory’s history. After documents, written in Spanish rather than English, declared the cargo to be dried fish aroused suspicions, officials found 24 tonnes of fins, most from endangered species such as thresher sharks, with a retail value of $1.1m.

Ecuadorian vessels fish illegally in protected areas such as Colombia’s Malpelo Sanctuary and Costa Rica’s Cocos Island and it is reported that, since 2018, at least 135 large Ecuadorian fishing vessels have entered the Galapagos Islands’ reserve, one of the largest and most biologically diverse marine protected areas (MPAs) in the world.

Fishing gets extra special treatment from the Ecuadorian Government. It often issues permits for the export of shark fins to Peru that do not comply with regulations put in place by CITES – an international convention on trading in endangered species. Under Ecuadorian law, fishermen can also sell endangered species such as sharks or turtles if they catch them unintentionally, known as by-catch.

The main fishing methods used by Ecuadorian fishermen, purse seining and longlining, often result in high levels of by-catch. Despite claiming that it is fleets from other countries that are responsible for IUU fishing in Ecuadorian waters and that their own by-catch is just 2%, conservationists do not believe them. However, even if by catch is as low as 2%, it is still high enough to annihilate some species.

Even more controversial than purse seining and longlining is the use of fish aggregating devices (FADs). According to a 2015 study, Ecuadorian ships deploy more FADs than those of any other country. Their industrial fishing ships release these into the current that passes through the Galapagos Islands’ protected areas to attract prey from the protected waters. They are also accused of fixing goats’ heads on the devices to lure sharks, surrounding them with nets when they leave protected zones, also trapping turtles, sea lions and manta rays.

Putting an End to IUU Fishing

IUU fishing could account for 20% – 50% of global fishing and could generate profits of $36bn a year according to the Stimson Centre, a think tank in Washington DC. The chances are, if you have ever eaten fish, then you have most likely eaten a catch from IUU fishing.

Over the last few years there has been push from governments and international bodies for fleets to do more on the sea. On land, the challenge is in chasing down the people who hide behind companies and ventures that are the backing of crimes at sea.

The EU, the biggest buyer of Ecuadorian tuna, has told the country to step up action against IUU or risk losing access to its market. In 2018, a committee within CITES recommended that its 183 members suspend trade in fish with Ecuador. In 2019, National Oceanic and Atmospheric Administration, an American government agency, accused Ecuadorian fishing companies of violating international conservation agreements.

Ecuador’s government has tried to crack down, especially after the EU’s warning, passing a law that increases fines for illegal fishers, and vessels are now prohibited from selling three endangered species of shark, even if they are by-catch. They have also started an advertising campaign to discourage Ecuadoreans from eating shark.

Conservationists are urging the government to double the size of the Galapagos reserve. That would debilitate Ecuador’s fishing industry and eventually lead to an increase in fish stocks and thus bigger catches.

There is also a call for governments to scrap fishing subsidies. $35bn in subsidies goes to the fishing industry around the world but $22bn of that per year harms global fish stocks. Experts argue that by scrapping these subsidies, it would make half of all high-seas fishing unprofitable and fisheries running illegal operations would close; giving fish stocks the opportunity to recover.